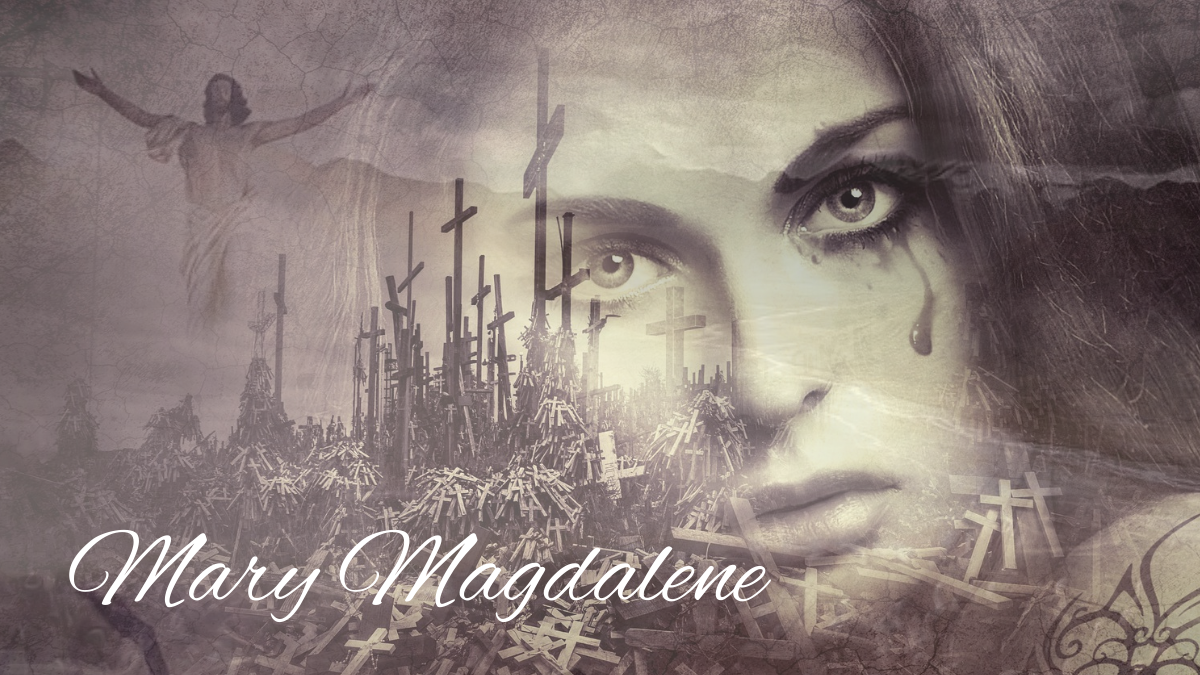 This poem is Part 2 of the Easter Story. It is the story of Mary Magdalene at the tomb on that first Easter Sunday morning.

The two feature images I edited together show Mary’s depth of sorrow at the cross and the risen Lord soon to become the height of joy for her. Jesus shows such grace and patience toward Mary as she transitions from thinking Him to be the gardener to knowing He was her Lord and Saviour.

I have included two Youtube videos at the end of the poem that reflects the story of the poem. Beverley Joy.

The Passion of Mary Magdalene – PODCAST

As the sun rose on that Sunday morn

Several women went to the tomb

They took the spices they had prepared

To complete the burial ritual.

The tomb was open when they arrived

The large entrance stone was rolled aside

They went inside, but they did not find

The body of their Saviour, Jesus Christ.

As they stood there puzzled, two men appeared

Clothed in white robes sitting to one side

“Are you looking for Jesus who was crucified?”

The women bowed to the ground, they were terrified.

“Don’t be alarmed. He isn’t here! He has risen from the dead!

Jesus said it would happen this way. Don’t you remember what He said?”

Now go and tell his disciples, what you’ve heard and seen

And that Jesus will meet them soon in Galilee.”

The women ran quickly from the tomb

They were so frightened but also filled with joy

But the story sounded like nonsense to the men

They didn’t believe what the women had said.

But, two disciples ran to the tomb to see

The cloth lay where Jesus’ body had been

Once they saw for themselves, they believed

They went home wondering “What has happened?”

Mary Magdalene, back at the garden tomb

Crying, she stooped and looked inside

The two angels asked, “Why do you cry?”

“They’ve taken my Lord and I don’t know where or why.”

She turned to leave and saw the gardener standing near

“Why are you crying?” “Who are you looking for?”

She cried through tear-stained eyes.

Wiping her tears, she searched His eyes

She recognized His calming voice

His face, His frame, it was Her Lord.

“Teacher” she whispered in wonder and awe

Her despair turns to the future hope

From the darkness of sorrow to the light of joy

From the separation of death to eternal life.

She fell on Him, clinging tight

He was real, a human, not a ghost

Never again would she let Him go

Now things would be as they were before.

Helping her to compose herself

“Go tell my brothers this message

The risen Jesus had appeared in the flesh

Not to rulers and kings, nor His disciples

But to a woman whose life He had saved

Who had followed Jesus to His grave.

The first man or woman to see the Risen Lord

And hear the first words from His lips

And be the first to spread the gospel message.

There stood a man and a woman in a garden

The power of His resurrection

Give eternal freedom and redemption.

The power of death broken in this new garden

And put right the Garden of Eden’s fall

The gospel message, the good news

“I have seen the Lord!” My Saviour is alive.

Jesus conquered death for all of us

The power of His resurrection

Is the power of a new creation

A time of joy and celebration.

The passionate love of God for us

His longing, desire, and joy has come

Between God and His creation.

Mary Magdalene, her passion and faith

In service to Jesus, at the cross and the tomb

No longer a melancholic passion for loss

But a passion that longs for eternal union with God.

The power of the creating God, the liberating God

Bringing mankind into a relationship with Him

To share this good news with strangers, enemies and friends.

All the women of the Bible Herbert Lockyer 1967 Zondervan

Women in the Bible: Mary Magdalene